skip to main | skip to sidebar

Richard and I exchanged a series of e-mails last week in which he remarked that Thai people generally have nice skin, which is something I've also noticed in Thai immigrants to the U.S. I believe you can often tell what kind of fat a person eats by looking at their face, especially as people age or bear children.

People who eat predominantly traditional fats like butter and coconut oil usually have nice skin. It's smoother, rosier and it ages more gracefully than the skin of a person who eats industrial fats like soy and corn oil. Coconut is the predominant fat in the traditional Thai diet. Coconut fat is about 87% saturated, far more than any animal fat*. Coconut oil and butter are very low in omega-6 linoleic acid, while industrial vegetable oils and margarine contain a lot of it.

I saw a great movie last week called "The Betrayal", about a family of Lao refugees that immigrated to the U.S. in the late 1970s. The director followed the family for 23 years as they tried to carve out a life for themselves in Brooklyn. The main fats in the traditional Lao diet are lard and coconut milk. The mother of the family was a nice looking woman when she left Laos. She was thin and had great skin and teeth, despite having delivered half a dozen children at that point. After 23 years in the U.S., she was overweight and her skin was colorless and pasty. At the end of the movie, they return to Laos to visit their family there. The woman's mother was still alive. She was nearly 100 years old and looked younger than her daughter.

In 1994, Drs. Cope and Reeve published a study using hairless mice in which they put groups of mice on two different diets (Cope, R. B. & Reeve, V. E. (1994) Photochem. Photobiol. 59: 24 S). The first diet contained 20% margarine; the second was identical but contained 20% butter. Mice eating margarine developed significantly more skin tumors when they were exposed to UV light or a combination of UV and a topical carcinogen. Researchers have known this for a long time. Here's a quote from a review published in 1987:

Nearly 50 years ago the first reports appeared that cast suspicion on lipids, or peroxidative products thereof, as being involved in the expression of actinically induced cancer. Whereas numerous studies have implicated lipids as potentiators of specific chemical-induced carcinogenesis, only recently has the involvement of these dietary constituents in photocarcinogenesis been substantiated. It has now been demonstrated that both level of dietary lipid intake and degree of lipid saturation have pronounced effects on photoinduced skin cancer, with increasing levels of unsaturated fat intake enhancing cancer expression. The level of intake of these lipids is also manifested in the level of epidermal lipid peroxidation.

A series of semi-purified diets containing 20% fat by weight, of increasing proportions (0, 5%, 10%, 15% or 20%) of polyunsaturated sunflower oil mixed with hydrogenated saturated cottonseed oil, was fed to groups of Skh:HR-1 hairless mice during induction and promotion of photocarcinogenesis. The photocarcinogenic response was of increasing severity as the polyunsaturated content of the mixed dietary fat was increased, whether measured as tumour incidence, tumour multiplicity, progression of benign tumours to squamous cell carcinoma, or reduced survival... These results suggest that the enhancement of photocarcinogenesis by the dietary polyunsaturated fat component is mediated by an induced predisposition to persistent immunosuppression caused by the chronic UV irradiation, and supports the evidence for an immunological role in dietary fat modulation of photocarcinogenesis in mice.

In other words, UV-induced cancer increased in proportion to the linoleic acid content of the diet, because linoleic acid suppresses the immune system's cancer-fighting ability!

It doesn't end at skin cancer. In animal models, a number of cancers are highly sensitive to the amount of linoleic acid in the diet, including breast cancer. Once again, butter beats margarine and vegetable oils. Spontaneous breast tumors develop only half as frequently in rats fed butter than in rats fed margarine or safflower oil (Yanagi, S. et al. (1989) Comparative effects of butter, margarine, safflower oil and dextrin on mammary tumorigenesis in mice and rats. In: The Pharmacological Effects of Lipids.). The development of breast tumors in rats fed carcinogens is highly dependent on the linoleic acid content of the diet. The effect plateaus around 4.4% of calories, after which additional linoleic acid has no further effect.

Thus, the amount of linoleic acid in the diet as well as the balance between omega-6 and omega-3 determine the susceptibility of the skin to damage from UV rays. This is a very straightforward explanation for the beautiful skin of people eating traditional fats like butter and coconut oil. It's also a straightforward explanation for the poor skin and sharply rising melanoma incidence of Western nations (source). Melanoma is the most deadly form of skin cancer. If you're dark-skinned, you're off the hook: 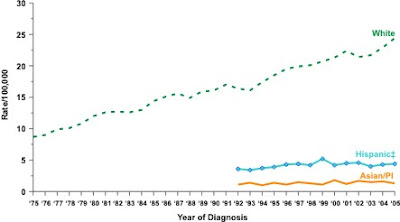 I believe the other factor contributing to rising melanoma incidence is sunscreen. Most sunscreens block sunburn-causing UVB rays but not melanoma-causing UVA rays. The fact that they allow you to remain in the sun for longer without burning means they increase your exposure to UVA. I've written about this before. Sunscreen also blocks vitamin D formation in the skin, a process that some researchers believe also promotes cancer. I'll end with a couple more graphs that are self-explanatory (source). "PUFA" stands for polyunsaturated faty acids, and primarily represents linoleic acid: 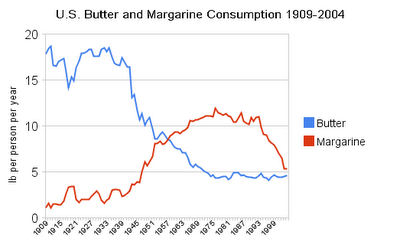 *Not only do Thais have clear skin, they also have clear arteries. Autopsies performed in the 1960s showed that residents of Bangkok had a low prevalence of atherosclerosis and a rate of heart attack (myocardial infarction) about 1/10 that of Americans living in Los Angeles.
Posted by ratna sari dewi at 9:01 PM

This post confirms my
ownership of the site and that this site adheres to Google AdSense program
policies and Terms and Conditions.